i miss my best friend.
i miss her a lot, a whole lot.
when i met her on my first day in secondary school, i mispronounced her name and since that day we became really, really good friends.
we looked alike, we were the same height, both thin.my parents loved her and vice versa. it was an awesome relationship and what i miss most is the gist and the misfits and the way we made high school fun for each other.

i remember in jss3 when we decided to play a prank on a mutual 'acquaintance' of ours.so we opened a new email using a boy's name and then we started sending her love mails and asking her out.On the first day that we sent the email, we told her how we had met this guy who liked her and so, since we didn't want to give out her number just like that we gave him her email id. three days later, we ask her about the guy and she tells us that she told him off and that she only replied him once....but.....she was sending him emails all the time and my best friend and i were replying and stuff.
after a while, we felt really bad so we decided to quit emailing her and just let the stuff die off but we told a friend, who told a friend, who told a friend..and one Friday during evening lesson, everything blew up in our faces and the girl found out and was really, REALLY, really mad at us. it was really funny though, we felt bad though.lol

In my ss1, a boy asked both of us out...yup.it was really funny to both of us but every other person in my set was making such a big deal out of it.i won't lie the guy was really cute but i just wasn't into him, i think its incredibly immature to ask out two best friends plus i didn't think it was right for him to ask me out considering the fact that his best friend asked me out every term through out high school.we both said no sha, but that was a very loaded time for gossip in my set. people were talking about how we were pretending to still be friends...some said that she told the guy yes behind my back..some said that i did the same thing.it was a mess but i personally think it was one of those events that you just come out of feeling closer and better.

in my ss3, we got nominated for the bestfriendsforever award for our year book that was never printed.

in my ss3, we both got into trouble with out parents.now, whenever i had to go out with my friends and i stayed out late i always told my mum that i had come home earlier but had gone to sparxx's house after wards (she lived quite next to me) and she'd say the same thing. one day, we both went to a party and we apparently forgot our parents' timetable that day cos we stayed quite late and when we got to our respective houses, we both told the usual lie. our parents were so mad cos they had called the others house and they had each confirmed that neither of us ever came to the houses. it was a bad day. that was our only confirmed story, we hadn't rehearsed anything in case the story fell through cos that story had never fallen through so we both clamped up. neither of us said a word.our parents shouted and raked and kept asking but neither of us said a word...we got grounded...FOR THE WHOLE TERM!!! we could only go to each other's houses if a supervising parent would be around. trust me, worst semester ever to be grounded. it was our final term in ss3!!!plenty of parties awaited us.

early in my ss1, sparxx started seeing this guy who i didnt like..i never told her but i guess she sensed it from my attitude. i mean, this dude was dating my sister's friend at the time he asked out my best friend and so we started drifting apart and the boy's sister who was in our set slowly started filling the gaps in our relationship. it was my first term in ss1, i was dealing with my grand ma dying and other issues that at that time, i seriously didnt care. the guy's sister kept making up all these ridiculous rumors about what i'd supposedly said, or done. it wasn't a pretty semester for me, but i got over it. when she broke up with the guy, her friendship with his sister didnt last either.so..we were back once more!!it was a very learning experience for me though.very.

boys are cheats and liars
they are such a big disgrace
they would tell you anything to get a second chance
baseball, baseball, he thinks he's gonna score
if you let him go all the way, then you are a whore!!

we had heard that song above in a movie and we formed some hand claps to the song and we used to sing it all the time in our jss3 and the boys hated us for that.
they used to insult us and tell us that they didn't want us either.lol
it was just for fun though but a whole lot of people took it seriously.
they said sparxx and i and some of our friends were trying to start a 'clique'...thats what my teacher called it.

my first crush ever was a guy my best friend also had a crush on.he liked her back, he just considered me a friend. we had good times together and even though, sparxx and i spoke of everything and told each other everything that guy was one person that neither of us ever spoke about. it was like a silent agreement not to let it ruin our friendship and it didn't.

we used to sing all the time in class...we both didnt have very nice voices, the songs i remember us profoundly singing was 'my boo' by usher, 'keyan boy, keyan girl' by a group i can't even remember, 'candy shop' by 50 cents and then 'irreplaceable' by beyonce. we always had the 'bestest' times singing these songs and we'd dance on our sits. she always used to try her hardest to make me laugh and she always succeeded. looking back now most of those things weren't that funny but i used to laugh till tears dropped from my eyes. she used to recite a particular poem that started with 'where has my love blown its horn?' all the time with this ridiculous look on her face and she'd be kneeling down and i used to laugh my head off till tears were streaming down my face. we had fun singing together, i remember when nicole and avant's 'lie about us' came out, i was obsessed with that song so she downloaded it on her phone for me.we used to read each other's text messages, we knew each other's pins, we used to talk about whose boyfriend we would steal if we had the chance.lol.we were pitiful.

sparxx and i had a beautiful relationship and i miss her so much. i miss having that relationship were i could talk for hours to a girl about nothing, we would talk till we had only 100naira remaining then we would wait and do midnight calls, we used to used that share credit stuff so much. especially when a boy would text me and i didnt have credit then she'd send me 50naira from her money and vice versa.
i loved her...i love her.it was a wonderful friendship and everyday i feel so lonely here and feel like i've not made any really close friends, i remember her and miss her even more.

meeting her made high school worth while, so i dedicate this post to her and i dedicate my 100th follower to her, whomever that may be, and i hope that no matter what happens, the memories of our friendship will never be forgotten. 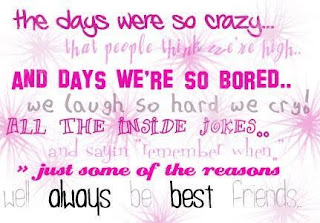 so, do you guys miss anyone from high school?someone you really loved, it could be a girlfriend or boyfriend, doesn't matter as long as you had a great time with them in high school, you can share that with me in the comments and tell me one very fun mischief you will always remember that you guys did together.

hey guys, how has your summer been?
mine has been really, really boring.

fave fb status: Me: I put it in the wrong hole. person: That's what she said!..That's what he said!..Somebody said that...