nigeria and other countries 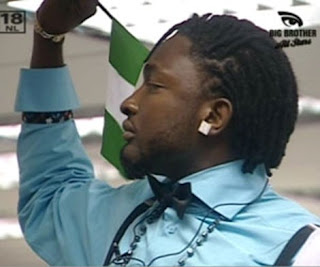 took a study break by 2:40am to read the BBA5 link my friend sent me...comments made after the uti win.
so, apparently, a lot of africans who commented said that he only won because he was nigerian...(ummm...duh!you think?!)
that because a lot of nigerians work at m-net so they just gave uti the money even though the other guy won.....(chee yah, try and get more of your people into mnet now).
that no matter what happens that nigerians are still known as crooks..(sure, we're crooks, but we're rich crooks)
that its unfair because we are the most populous black country in the world so they shouldnt choose by voting...(sigh...dont forget highest number of telecommunication networks in africa so we kinda have the cellphones to vote too)
someone even said something about the size of our penis..(yeah, just like d'banj said: we are kinda endowed like that)
big brother africa is nigerian..(this one cracked me up, i mean he doesnt have to be nigerian, we are crooks, we probably just bribed him.)
because we are rich we think we can dominate africa...(yeah...sigh..sorry but if it makes you feel better, obama didnt come to our country, he went to ghana.i think thats why hes approval ratings are dropping so much btw.lol)
someone said our anthem is such an irony..(yeah, we kinda used that literary device cos we are literary geniuses like that...side eye at wole soyinka, chinua achebe, chimamada)
if our girls are so pretty why did uti go for sheila(shes apparently another contestant), someone replied this comment and said 'because nigerian girls are ugly' ..(yeah, thats why we are the only country that has produced a black miss world who also ranked 7th in the universe..yawn, very boring fact ofcourse)
nigerians are manipulative..(ummm...baby?we know.)
some of the comments:
- All 9JA people are arrogant and shallow and they think they own GOD
- ITS CONFIRMED!!!!!! MNET IS TRYING TO BUY NIGERIAS VIEWERSHIP CAUSE OF ITS POPULAS...ITS A HUGE MARKET!!!! ....AT OUR EXPENSE!!!
- he battle was between Munya & Mwisho. They have been robbed. My take would have been Mwisho.It is 419 as usual.
- True guys south africa need to wake up nigeria make money out of us. It's not a an african show but nigerian. if you guys remember if those guys none of their countries voted where are thre other vote.
-
p.s:ofcourse you have to take their english into consideration.
dont you just love it when other african countries hate on us?
i didnt watch the show but just reading that thread gave me an idea of what the show was like.
so apparently ghana supported us-im still in shock by this fact sha.
i wish i knew how to do a screen shot. the comments were super funny.
back to doing thermo homework, studying for statics exam and writing a paper for my english class.
sigh.
i hate school.
Posted by leggy at Sunday, October 17, 2010

loooool! abeg they should stop hating jare. couldn't watch it but i got live feed on bb. screamed when i heard uti won. i believe he deserved it plus he was only nominated for eviction about 2ce unlike munya who though survived was sha nominated about 6 or 7 times. simply goes to show people don't like him das ol.

Buhahahahahahahahhaha!
To the other African nations: 'Hating us wont make you pretty. Not our fault we are better than you'


But rlly why the hell are we so damn cocky?

To do a screen shot just press 'prt sc' (stands for print screen and literally takes a shot of the whole screen) and paste it wherever you wanna. Some keyboards require you to press the 'fn'(function)key to get the print screen function (kinda like using shift to get capital letters).

If you wanna crop a particular part out all you need to do is paste it in Paint (one of your accessories in windows) or Microsoft Picture viewer and crop it.


Hope that helps and is explanatory enough.

Nigerians have mouth just because they give us mouth...if only we go take am do better thing...I wish Uti didn't win tho...he was a jerk for the better part of the show and to me it's worse than Emeka Ike winning Gulder Ultimate search.

"(sure, we're crooks, but we're rich crooks)"
No way leggy, we are not crooks. some of us are crooks, a few of us.

It feels good to be biffed, everyone can't like you and if they like you, it probably means you are not progressing.

Hmm, Uti is handsome, but he wasn't my choice..
I was actually shocked when he won.. Good for him though..
God's grace in your study and exams.

histreasure said...
This comment has been removed by the author.
Monday, October 18, 2010

I was soooooooo happy Uti won, at first, i really didn't care cos i thought naija won last yr and so someone else will take it, but the level of disrespect and segregation from MUFC and SADC was too much..

As for Uti attitude, you just have to know him to understand him tho i must confess, he took his jokes too far a couple of time but never with any hard feelings, just misunderstood..

and then he was real..well, at the end, Munya did himself in, so he got no one to blame..also, we had to teach them a lil respect..you had to follow the game on nairaland, uti and munya's fb page and zimbo forum to realise it was WAR..yep!

Lmao all these comments cracked me up, it feels good to be beefed,it shows that we are better than them. I was soooo happy that Uti won.

Best of luck in your school work.

lwkmd. these comments just made my night. p.s i don't know why i assume u have a mac? for screenshot its command+shift+3.

^^^^ahhhhhh, and the award to the person who doesnt get sarcasms or jokes goes to....

not nigerian actually ghanain, but i've a lot of naija friends and i think no other nation is populated with soo many confident people makes it a lovely place to be, y'all keep it up. and no one deserved to win more than uti