just had the most infuriating argument on facebook about rape. 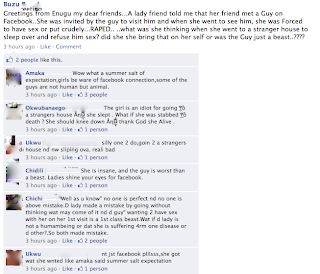 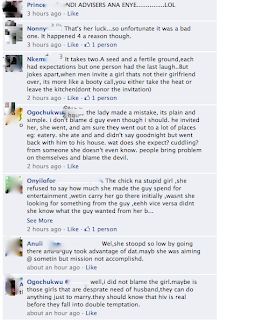 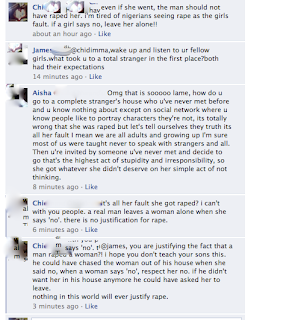 click on the pictures if you can't read them.
so, if you check out the first picture you get the scenario, now i'm by no means saying that the girl was right in going to the man's house that she does not know. you can't just pull up and go to see some man you have never met before without certain precautions. but does this justify rape?!

everyone was blaming her and ignoring the fact that said man RAPED a girl, what happened to chasing her out of your house?! if all you wanted was sex and she refused what happened to asking her to leave?!

if you look at the second picture, some person called nkem said 'it takes two'. huh?! how does rape take two? do i have a different dictionary?! don't even get me started on that stupid tina on the last picture.
this whole discussion just totally ruined my day.i was mad that i was the only person who seemed to have read the fact that the man RAPED her. it's irks me that majority of the people saying this are fellow women. the last woman excluded.

i'm sorry but i don't think anything in the entire world can ever justify rape. if a woman says 'no', respect her no. get permission. and this is what i personally will teach my sons if ever i get blessed with any.

tell me people, am i mad in thinking this?!

i'm so mad that this is what finally brought me out of my hiatus. school started today. retaking my thermo class. finally decided even though friends(even till today) tried talking me out of it. good luck to everyone that started today too.

it's 11pm and i'm in school typing this and ordering my books because my internet sucks and my roommate does not want to get another one. i mean seriously? what is the point of being in America if i can not have fast internet?! like warridis?

anyone who follows me on twitter knows how obsessed i am about korean dramas. i LOVE them.

soundtrack to this blog: songs by reckless kelly on my spotify.